Please sign up here under the correct ratings category and add your partner's name in the blank requesting it.  Each team should sign up only once under one of the partner's name. Numbers of teams in each category is limited to 4.  Women’s and Men’s play will be in the morning, beginning at 9 AM,  and mixed doubles will be in the afternoon, beginning at 1 PM. If interested, you may sign up for mixed doubles in addition to women’s or men’s doubles.

This is a fun, inter-community round robin between two Robson Communities.  We encourage you to participate.

Lenny Friedman, USAPA Ambassador, will be offering a referee training session on September 9th from 1:00-3:30 in the Conference Room at the Kino Center.  If interested, please click here to reserve a spot.

Take the referee training and improve your pickleball play by expanding your knowledge of the game.  A referee's primary responsibilities are to watch for foot faults on the serve and non-volley lines, to keep track of the score, and to keep a constant pace of the game. Being engaged in the flow of play will help you improve your own play.

Taking the referee training  does not obligate you to referee in any of the upcoming tournaments at Quail Creek, but your volunteering is appreciated by those running and playing in tournaments.  Referee's aide in providing standardized good play for all.

Round Robins on Wednesdays

Round Robins will continue on Wednesday mornings.  Sign-in between 6:45 - 6:55, and be ready to play at 7 AM.  If the numbers permit, there will be separate Round Robins for men and women; otherwise, these will be combined.


I even surprised myself with all of the accomplishments that the USAPA achieved during 2016. A quick review of 2016 statistics illustrates how the USAPA grew in just a single year.

Places to Play: 4,747 (increase of 970 or 80.8 per month)
Total Courts: 16,549 (increase of 3,760 or 313.3 per month)
Members: 16,793 (increase of 6,491 or 540.9 per month)
Ambassadors: 1,454 (increase of 225 or 18.7 per month)
Officially rated players went from 6,000 on 1/1/2016 to 8,638 on 12/31/16. That's a 2,638 annual increase in initial ratings for new players which was roughly a 30% increase in one year. In addition, there were about 800 players who already had a rating, that had a rating change.
Christine Barksdale named Managing Director of Competition
St. Jude named as official charity partner of USAPA
USAPA certified 29 new referees in 2016
A new contract was issued to Pickleball Central for apparel, and the new usapastore.com was launched
A new membership automation system was deployed
USAPA and Dollard Publishing teamed up and produced 6 pickleball magazines during 2016
The USAPA Rules Committee met numerous times and completed updates as needed
Nationals VIII was held in November of 2016 with a record number of attendees
USAPA endorsed TrackitHub ladder league management software
Longtime USAPA board members Linda and Lynn Laymon retired from the board as they participated in and guided all USAPA National’s matches refereed by their newly created certified referees
All medal matches at Nationals VIII had certified referees
Jack Thomas retired as the Ambassador Chair moving to the role of Vice President (Jack was replaced by CJ Jermstad)
A highly popular Ambassador retreat was hosted at Club Med in Florida with over 200+ attendees
A third party contractor was hired to do all ball and paddle testing
USAPA launched a Juniors program at Nationals in November
There were 278 rating appeals processed in 2016
USAPA awarded 128 pickleball grants
Social media expanded with live coverage of several pickleball tournament medal matches
To view this fantastic magazine click on the following link: May-June Magazine. Those are the highlights of 2016. Please join us as we begin a new calendar year promising to be both fun and exciting.
Join the USAPA on Facebook
Join the USAPA on Instagram 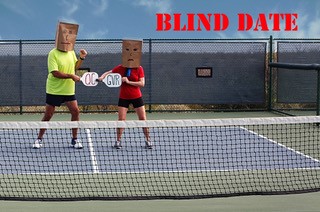 On November 11-12, Quail Creek will host a Blind Date Tournament to benefit the Green Valley Food Bank and  Friends In Deed.  Your date (partner) for this tournament will be randomly chosen from players from Green Valley.  There will be Women's, Men's, and Mixed Doubles at the 2.5, 3.0, 3.5, and 4.0 levels.  Information, registration forms, and waivers can be found on our website (www.qcpickleball.org) on the right side under Tournaments. Click here to go there directly.